In the Eastern Orthodox Church, the feast of the Resurrection of Jesus, called Pascha (Easter), is the greatest of all holy days and as such it is called the “feast of feasts”. Immediately below it in importance, there is a group of Twelve Great Feasts (Greek: Δωδεκάορτον). Together with Pascha, these are the most significant dates on the Orthodox liturgical calendar. Eight of the great feasts are in honor of Jesus Christ, while the other four are dedicated to the Virgin Mary — the Theotokos.[1]

The Twelve Great Feasts are as follows (note that the liturgical year begins with the month of September):

Besides the Twelve Great Feasts, the Orthodox Church knows five other feasts that rank as great feasts, yet without being numbered among the twelve. They are: the Circumcision of Christ (1 January), the Nativity of St. John the Baptist (24 June), the Feast of Saints Peter and Paul (29 June), the Beheading of St John the Baptist (29 August), and the Intercession of the Theotokos (1 October). 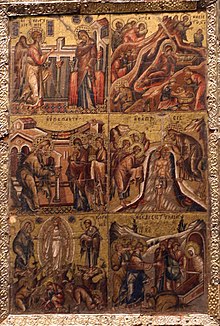 The leavetaking (Greek: ἀπόδοσις (apodosis); Slavonic: отдание (otdaniye)) (also known as apodosis or conclusion) of a feast is the final day a feast is celebrated in the Church. In most cases it follows an afterfeast. On the leavetaking, most elements of the festal services are appointed to be served again. In the western rite, the Octave of a feast has a similar use.

Pascha and most First and Second Class feasts have leavetakings. See the Afterfeast article for the specific dates of these leavetakings.

An Afterfeast is a period of celebration attached to one of the Great Feasts celebrated by the Orthodox Christian and Eastern Catholic Churches (somewhat analogous to what in the West would be called an Octave).

The celebration of the Great Feasts of the church year are extended for a number of days, depending upon the particular Feast. Each day of an Afterfeast will have particular hymns assigned to it, continuing the theme of the Feast being celebrated. At each of the divine services during an Afterfeast, the troparion and kontakion of the feast are read or chanted. The canon of the feast will usually be chanted on every day of the Afterfeast (if two canons were chanted on the day of the feast, they will be alternated on the days of the afterfeast). Some of the Great Feasts of the Lord will have a special canon composed of only three odes, called Triodions, which will be chanted at Compline on each day of the Afterfeast.

Most of these Great Feasts also have a day or more of preparation called a Forefeast (those Feasts that are on the moveable Paschal Cycle do not have Forefeasts). Forefeasts and Afterfeasts will affect the structure of the services during the Canonical Hours.

Four of these Afterfeasts have a special commemoration on the day following the Feast, called a Synaxis. In this context, a Synaxis commemorates a saint who is intimately bound up with the Feast being celebrated. The four Synaxes are:

Other Great Feasts that have Afterfeasts (although no Forefeasts) are:

Each of these three has only 1 day of Afterfeast, and no Apodosis. These are not counted among the Twelve Great Feasts (i.e., Great Feasts of the Lord or Theotokos).

Even though the Patronal Feast of a parish church or monastery is treated as a Great Feast, it has no Forefeast or Afterfeast.

The Feast of the Procession of the Cross (August 1), though it is not counted as a Great Feast, has one day of Forefeast, and no Afterfeast.